Microsoft, Google, Apple & Mozilla announced yesterday that they're removing TLS 1.0 and TLS 1.1 protocols from Internet Explorer, Edge, Chrome, Safari & Firefox browsers in the middle of 2020. Your visitors most probably don't use them already so you can disable them in your server configs today. But let's verify that first using the “Handshake Simulation” tool available in the SSL Labs Server Test.

The TLS (Transport Layer Security) protocol secures HTTPS and its first version dates back to 1999. It's a successor to SSL 3.0 which was published in 1996. SSL (any version) is not supported by browsers for more than 3 years already, and your server shouldn't support it either. Deadline for disabling TLS 1.0 for payment gateways and websites handling card payments was summer 2018. 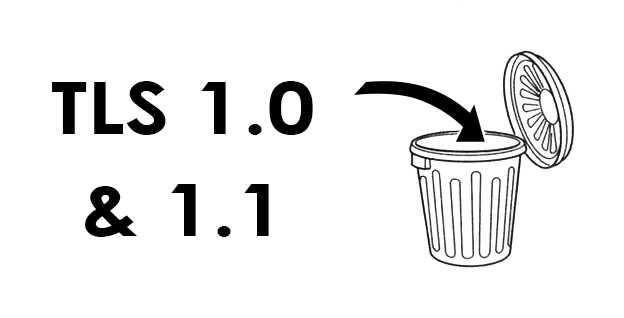 If a server still supports these then the attacker might be able to downgrade the otherwise secure connection to use these insecure protocols instead of TLS 1.2 or TLS 1.3 although modern browsers have removed such fallback some time ago already (in Chrome 50, Firefox 37). Thus it's recommended to disable (since March 2021, there's an RFC 8996 for that) them but let's check first which browsers still need these old TLS protocols. Just a few of them do, and none of them is a modern one.

You can find out which browsers will be unable to access your server once you disable TLS 1.0 & 1.1 with the SSL Labs Server Test. Enter your Hostname, click Submit and wait, testing takes a minute or two.

My site gets the best grade but don't act surprised

The test checks your server's HTTPS configuration, and the result should be A or A+. You can't get A or better when you have old TLS enabled, starting January 2020. There are a few things that come into play here, check the rating guide. But this post is not about grades, I'll focus mostly on TLS versions below.

The Configuration section starts right below the certificate info. It lists supported protocols and the Handshake Simulation table shows simulated browsers, and tells you which protocols and cipher suites they use to make a connection to your site.

Truncated results of the handshake simulation for a random server

The “handshake” is the first phase of the HTTPS connection. The browser uses it to negotiate protocols, cipher suites, encryption keys with the server. SSL Labs simulates some 50 different browsers and shows the results of the negotiation.

Let's explain the first line but donut worry, it's not a cryptography deep-dive:

Android 2.3.7
The simulated browser, or HTTPS client in general, and which version

No SNI2
Just a note that the browser, Android 2.3.7 in this case, doesn't support SNI (Server Name Indication), which allows to run multiple sites on HTTPS with just one IP address, each with their own certificate (that “2” in “SNI2” is just a reference to a footnote) – what it means for you is that if you want to support such old Androids you'll have to have a dedicated IP address for your site

RSA 2048 (SHA1)
RSA means a lot of things, here it indicates a certificate- and a private key type, 2048 is the size of the key, and SHA1 shows which algorithm was used to sign the certificate – it shouldn't be used anymore

TLS 1.0
The protocol and it's version used for the connection

TLS_RSA_WITH_AES_128_CBC_SHA
The cipher suite, defines the key exchange and the cipher for the connection

No FS
“FS” means Forward Secrecy and the result indicates that the “cipher suite” is not Forward-Secrecy-compatible, which means once the attacker gets the private key from the server, they might be able to decrypt both past and future communication if they're able to record it

Now let's check the last line of the previous picture:

EC 256 (SHA256)
The certificate and the private key was the one created with Elliptic-curve cryptography, EC keys and certificates are much smaller (the key has “only” 256 bits), are processed much faster and the browser support is great already (I've switched my site to use just EC certificates); SHA256 means signature algorithm from the SHA-2 family of hashing functions which should be used for certificates

Checking all the lines, you can see which browsers have used TLS 1.0 or 1.1. If you don't want to or don't need to support them just disable these old TLS protocols in your server config. Slevomat.cz, the biggest daily deals site of the Czech Republic (now acquired by Secret Escapes), has disabled old TLS protocols already, so maybe you can too. Your server admin knows how to do that, there's SSLProtocol in Apache, ssl_protocols in nginx.

At the bottom of the Handshake Simulation section, there's Not simulated clients (Protocol mismatch) list. These browsers using their default configuration tried to connect to your site using an unsupported protocol. The list looks like this for my site, below is the most interesting part, and the full list also includes old Java, OpenSSL from the day when dinosaurs still roamed the Earth, and Safari 5 & 6 on OS X: 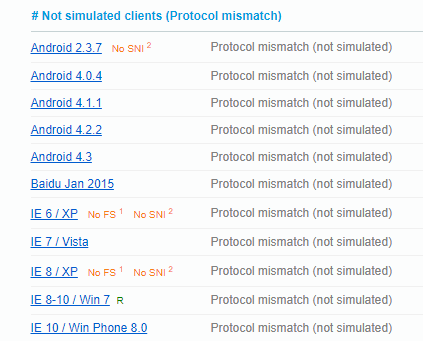 Disable what you don't need

While you are at it, you can also disable unused cipher suites. SSL Labs Server Test marks some of the cipher suites as weak, and some of them even insecure, but you can disable them in your server config if none of the browsers you wish to support requires them. My server offers just 5 cipher suites, and I've used Mozilla's config generator with the “Modern” profile to configure them.

If you want to know more about HTTPS and TLS you can sign up to The Best TLS Training in the World authored by Ivan Ristić, the founder of the SSL Labs site, and run by my friend Scott Helme of Report URI, the tool I also work on. I offer HTTPS training in the Czech Republic, the second best one I guess 😊

January 14, 2020 Chrome flag to show Not secure when legacy TLS version was used